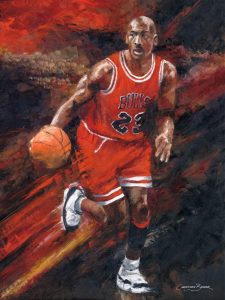 A stunning painting legend who played for the Chicago Bulls basketball team. He is also known as the best player in the  NBL history. The size of the original painting is 24″ x 30″.

The original painting signed by Jordan 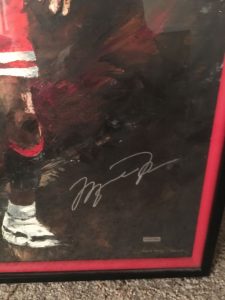 The owner of the original painting asked the athlete to sign the artwork in Los Angeles.

A few interesting facts about Michael Jordan:
1. When in school he got suspended three times! First, he cussed at the teacher and leaving the school grounds without permission. He was also involved in fight with a fellow school mate.
2. He has a fear for water! A childhood friend drowned when they swam in the ocean.
3. In 1990 he had to play in a number 12 jersey because someone stole his number 23.
4. A limousine driver is his best friend.  George Koehler gave him a ride at the Chicago airport. After 30 years they’ve still been best friends.